Yet another Linux Botnet sample by the name of Bushido by a group called 0ffsecurity, but this time things are little interesting, the bad actor is not just interested in using compromised IOT device as DOS attack surface but also using compromised web servers. In this post, we will examine how a small infection shell script which leads to the unravelling of dozens of malware. Solving this case also uncovered the hacker group behind this malware.

Let’s get right onto it, the infection script basically downloaded the bunch of Linux binaries from the malicious server and runs it, these binaries are compiled for different platforms as you can see below.

In this post we will reverse only 64-bit ELF binary as the rest of the binary will have the same functionality.

These are all the samples which were discovered during the analysis.

Let see the file information of the binary.

Since there were lots of symbols so as not to lengthen the post I have included only a small part of the section. Now let’s see all the symbols ending with “.c” that will give us an idea by the name program of the file.

Bushido-IRC.c interesting !. Next stings, this was the most interesting part of the analysis, you won’t even have to open the disassembler to understand what the malware does, strings will confess it all to you.

There were lots of strings, just by skimming through the strings you can make out the functionality of malware. But here is the summary of the interesting strings you will find:

looking at the string you can make a reasonable judgment of what their malware does. But to Investigate the execution flow and how to malware connect to CNC we should dig further. Since we found the IP in the strings, we can do a simple port scan of the CNC server, this is where I found the malicious pearl and PHP code, more on it in the next section.

Once you see IP address inside binary its a natural instinct to do a simple port scan on the IP, so innocent nmap scan on the server and got the following results.

From our earlier finding its reasonable assumption that this malware is an IRC botnet hosted on Server A. If you try to connect to the server using any IRC client you will find two channel on that IRC Server :

Once the malware is running it connect to IRC server with the following command NICK[ZULL|x86_64]ZM5z format of the command is NICK[malware joins the channel #zull using a password which is hardcoded in the binary which can be seen in below disassembly. 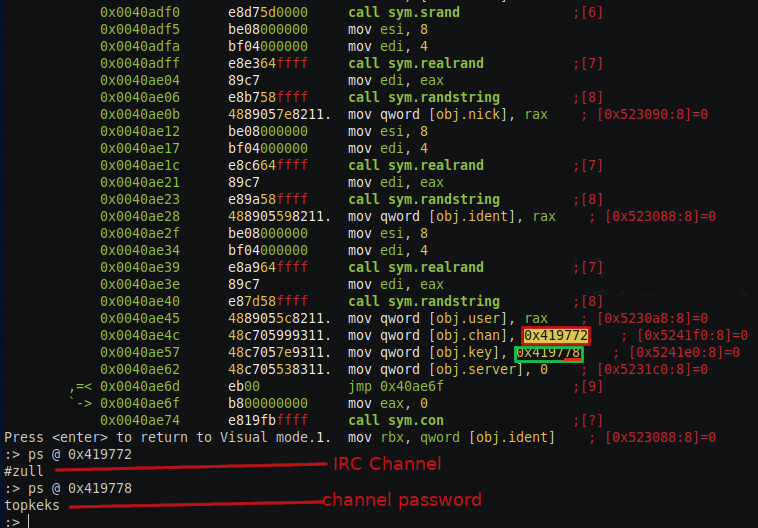 Since binary has the debugging symbols not stripped, you could read the disassembly code effortlessly. Based on that you can make the following claims: 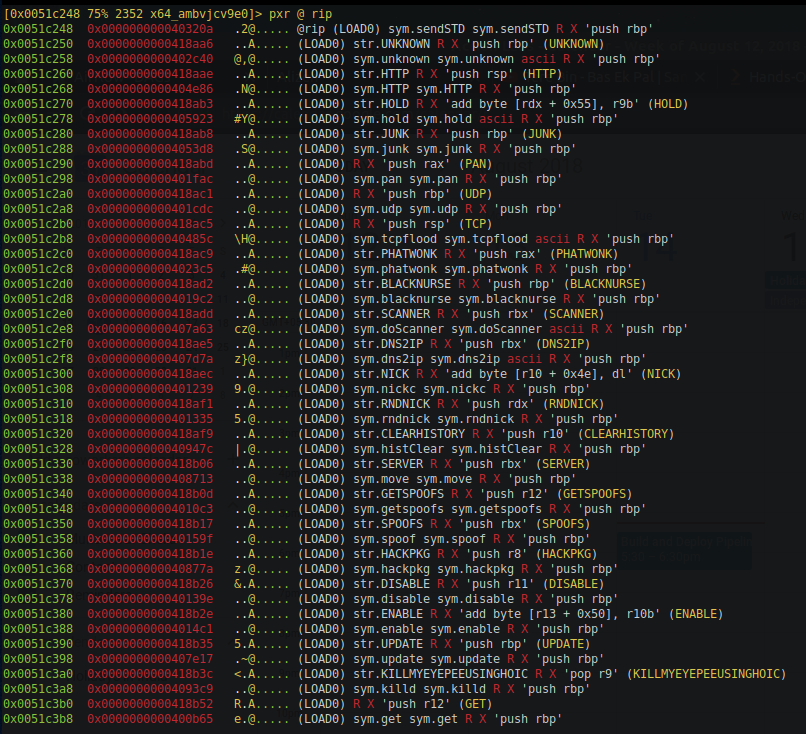 So far we understood that bad actor compromises IOT devices or web server and use them as the attack surface for DDOS. The command to the infected devices is given through IRC channels. The bad actor uses channel #zull to command the IoT devices and #pma to the command we servers. IOT devices are infected with binaries and the servers are infected with PHP or pearl script. Functionalities of both the malware are described in more detail in the next section.

Once you are connected to the IRC server you will have seen the following information on the channel.

I tried to search for these name which we see in above image on twitter and these are the accounts I found on twitter :

I couldn’t find other accounts, these people belong to a group called 0ffsecurity. My guess is they are trying to sell this botnet as a service. As doing a little google search you will find the following accounts.

This malware is not new in this space and I am quite sure that these people have borrowed lots of code from the Mirai and made it into a new DDOS tool. They are also using the compromised web server as a DDOS attacking agent, and they are using IRC server as common CNC server to control both infected web server and IOT device.